Many people are sensitive about how their coolers compare to other brands. If you are among hardcore cooler fans, then spending plenty of time analyzing coolers based on ice performance, robust build, great latches and proper lid sealing is perfectly natural.

Maybe you are in the market for a new ice chest. But you have options to choose between the Igloo Sportsman or Yeti.

Why would you pick one over the other?

If you are here for the Igloo sportsman, it’s only ideal you compare it to the ice chest company that has set the bar high; Yeti.

Oh well, chances are you want to reassure yourself that Yeti is still the most prominent product in the market.

In this head to head review of the Igloo sportsman Coolers vs. Yeti Coolers, we are going to compare both brand cooler regarding ice retention, insulation, design, colors, construction, and warranty.

Igloo sportsman has limited cooler varieties under their belts. Though the sizing is not flexible, you’ll get a small, medium and large option to choose.

Size matters in everything – well, not everything but almost. Both cooler brands boast of an array of sizes ranging from small to giant coolers. Whether you are looking for a medium cooler for short trips, picnic or the beach or large chests with enough space to cater for lots of people, here are some offering from sportsman and yeti.

We have the full list of yeti cooler sizes here.

There’s no doubt; the sportsman is among the top Igloo cooler in terms of sheer strength, insulation, and ice performance.

Combination of Rotomolded construction and the cool riser technology offers up to 5 days or more of ice.

The Igloo is designed to hold ice in solid form not just for hours, but even days, which depends on the condition and content to the ice ratio.

Although in some tests, Igloo coolers came out on top, while Yeti in others.

Since the difference is a bit teensy, with both coolers able to perform at top level for 5-7 days, we’ll be forced to say a draw is only befitting for both brands.

Igloo sportsman is of rotomolded build which means it utilize thick walls. But how does it compare to Yeti?

The sportsman has 2-inch thick body foam and 2-inch foam in the basket lid. While the Yeti has a slight increase concerning body insulation at 2.5 inch and 3 inches of insulation on top.

From the specifications above, it is crystal clear that the Yeti has superior insulation. 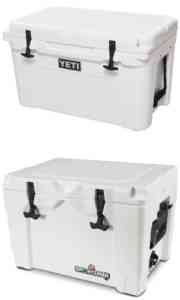 You’ll be enthralled to hear that there’s great parity between both cooler with regards to latches, lid, handles, Tie downs, lid hinge, and color options.

The Igloo and Yeti each have a similar design, especially the exterior. Flat lid top two lock holes, and curves on the edges.

As you might expect, the system of securing the cooler utilizes the ball and latch.

While both latches are made of rubber, the Sportsman is slightly thicker. But bigger doesn’t necessarily mean better, in fact. The latches tend to secure the coolers well.

Regarding the latching efficiency, both perform awesomely; the Sportsman latch is recessed to the cooler while the Yeti’s protrude a bit. The former help to be fit into tight spaces, with little or no hindrance.

It’s such a shame Yeti doesn’t have an embossed ruler in the lid. However, sportsman does. Most impressively is the cutting board area which hardly gets scathed.

If you are looking for a good fishing or marine cooler, the sportsman is a better option period. Thanks to the integrated ruler and cutting board in the lid. 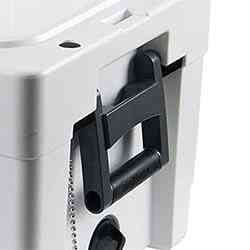 Tired of handles that are slippery, weak and tilts on one side when you carry it? The swing-up (T-handle) handles is built with regards to stabilizing the contents inside the cooler when users lift it up.

Comfort grip handles ensure your hands don’t get stressed from transporting the cooler over distances. When the cooler gets heavy as a result of the contents, the handle on the other side can be gripped by a friend to make ease to your destination.

On the other hand, Yeti has a nylon rope handles, comfortable but not as effective as the sportsman. Although I believe, the Yeti rope handles will last longer than the sportsman, since rubber parts are susceptible to break. 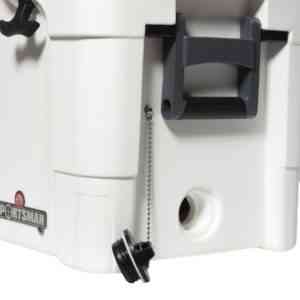 The Sportsman use a 2-inch oversized drain attached to a chain. However, Oversized drain plugs are at best good news and worse bad. You don’t want all your ice slipping through the large hole, but I guess ice sheets would hardly pass through.

But there’s a quick fix.  Instead of unscrewing the drain plug completely, slightly leaving it open would drain water, while the ice won’t go out.

While the Yeti use a 1-inch drain plug that could be completely detached. Unlike the sportsman, yeti does not have a chain; thus, chances of losing the spout increasing become likely.

However, when it comes to quick and efficient drainage, the sportsman will be the favorite at pole position.

Want a cooler that can stand to the menace of harsh weather, grizzly bears, and intruders. Thanks to the rotomolded technology, both durability and insulation are guaranteed.

Sportsman uses a 2-foam inch wall with a foamed gasket lid; the result is top notch ice performance. As far as ice retention is concerned, the sportsman will have a stake to the claim high-cooling performance.

Albeit, the construction of igloo sportsman, has some lapses. First off, the user complaints of the lid not sealing tight to the base and other minor concerns.

Yeti has taken care of most of the issues that have seemed to defaced most premium and conventional coolers. Although there no such thing as perfect, Yeti is standard on which all coolers are measured. Hardly are cases of Yeti products failing to minor construction issue.

When you want a Buy for life cooler, the Yeti is by far a better option than the igloo sportsman.

Coolers certified as bear-proof are the strongest. In fact, most bear-proof coolers have a Rotomold construction. However, latches are not strong enough to hold down a grizzly animal from breaking in or intruders either.

That’s why you need the best padlock to protect your cooler. The good news is both Yeti have padlock holes on both edges. Needless to say, fitting two locks in both ends makes the cooler impregnable to an extent.

The color of a cooler readily matches the purpose of its intended use. Marine functions usually require a white color as it repels UV light more than any color.  Hunting functions might need a Tan color to camouflage to the environment. We’ve also made a good list of camouflage coolers which you can check out.

For me, the basic and best two coolers are White and Tan, of which sportsman utilize both colors. On the other hand, Yeti is more liberal with the White, Tan and Blue colors.

Coolers exposed to harsh weather conditions are likely to get their color faded. The finish on both coolers takes care such likelihood. However, among the two, Yeti has a superior exterior finish.

In the world of imperfect products, shipping problems, manufacture defects, etc. You need a guarantee to make sure even the aforementioned comes up; there’s a warranty to cover all damages.

It’s not impressive to find out Igloo only offers a 5-year warranty which is same as the Yeti. But It’s a win-win situation, right?

No, not when giants like Pelican and others offer a limited lifetime guarantee.

What’s covered in the 5-year warranty?

It covers the body of the cooler but excludes parts that are susceptible to damage like non-skid feet and latches.

There’s no need for debating; Yeti cost an arm and leg compared to other coolers on the market. It has even sparked a debate if Yeti coolers are worth the price.

Accessories provide optimum utilization of the cooler. To enjoy your using your cooler, Igloo recommends some accessories and parts to elevate user experience.

It’s all in the details. Parts and Accessories help arrange your cooler. To keep things organized and prevent the contents from mixing up, the wire cooler basket is all you need.

The grid pattern under the bottom is wired closely to prevent items from slipping down, while it also provides enough space for air to circulate.

Made of strong polyethylene-coated steel wire, the wire basket stands against the menace of liquid. You won’t have a problem of corrosion no matter how frequent it comes in contact with water.

Even the best coolers need ice packs keep items cold for extended periods. Ice sheets are better alternatives to natural ice; they don’t create a mess after melting. Although both have their advantages and disadvantages, in most cases ice packs are preferred by many.

Igloo knows the best way to keep a cooler at top-notch performance is with an ice sheet – the maxcold ice pack is a reusable product, and it’s nontoxic. Maintenance of the pack is an easy pissy process – wash after each use.

Have a problem with your drain-plug? Best you change it today with the triple-snap drain plug assembly. Having used this product, I feel qualified to tell you; leak issues are things of the past.

The triple snap drain plug consists of a trip-snap cap to prevent leaks. The cap is tethered to avoid the cap from falling off.

There are times when you’ll need to rest, times when you might need a cushion to sit on top. Sitting on a cooler lid is a welcome idea but overdo it, and it is likely to break. And we don’t want that or do we?

The solution? Igloo Sportsman Seat cushion. It comes in various sizes depending on the cooler quarts you want. Made of 3-inch premium foam, water resistant vinyl to protect against harsh weather conditions.

Utilizing stainless steel snaps on the sides, adding to the stability, you wouldn’t have to worry about the cushion failing off the cooler.

Where to Buy Igloo Sportsman Coolers?

Amazon is our no one go to resource to buy sportsman. Yes, you will get informed decisions from users who have used the said product giving you the first-hand pros and cons.

Alternatively, you could buy the products directly from Igloo official site here.

Igloo Sportsman Vs. Yeti – Which Is A Buy For Life Product?

We’ve come a long way thus far in this review, and most of you would expect a clear answer to which is a better product. You have to match on the pedal a little bit.

The Yeti is the superior product in almost every aspect, and for the price it sells, well that justifies it.

On the other hand, the Igloo sportsman is more affordable and provides almost the same features & value the Yeti offers.

Slight differences separate these coolers but will have a long-term effect in the long run. It might be my personal opinion but the sportsman going head to head with Yeti is rather ambitious. The Yeti is the clear winner in most categories especially if we are talking about a buy for life product.

Since opinions are entitled to oneself, below is a poll for you to choose which cooler is better.