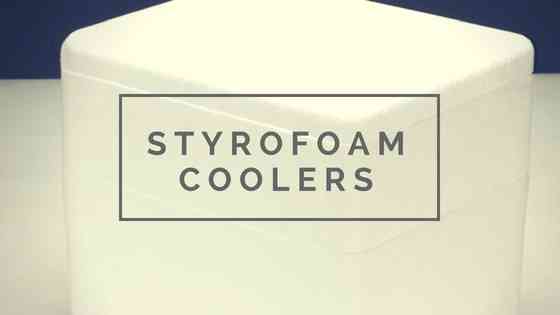 It is a common knowledge that most coolers are inexpensive except the high-end and luxury options. The former applies to Styrofoam coolers? What are they anyway?

Styrofoam is a whitish lightweight material primarily used as insulation material for different applications. It is made from the reaction of benzene and ethylene from either petroleum or gas.

With that out of the way, Styrofoams are inexpensive insulation materials in coolers to retain drinks and food temperatures cold or hot for extended periods. It’s user-friendly, owing to its dispensable nature and lightweight feel.

In this review, we’ll go in-depth to show you the best Styrofoam coolers. We’ve also included a detailed description of what to expect from the product listed below.

The industry offers a variety of great Styrofoam coolers; hence it’s quite difficult to choose one among many. We have narrowed down the list to just 7 of the best Styrofoam ice chest with excellent feedback from real users.

One of the most user-friendly options product on the list is the Lifoam Hercules. Made of 1.5-inch-thick walls, and heavy-duty hinged lid to help tight lid seal, what you get is increased insulation, thus, more ice life.

So that you know, these coolers can’t replace Rotomolded options. If you plan a day trip to the beach or picnic, this product will suffice, but for more than a day, all your ice will melt. However, you could make use of long lasting ice sheets to prolong the cold.

Lifoam Hercules in among our top Styrofoam coolers. Is it perfect? Of course not. Some users complained about the fragile nature and production defects. Aside from that, you have a winner in hand.

Lifoam has a reputation for producing some of the most awesome Styrofoam chests.

Remember the  Lifoam 5345 Hercules we reviewed above? This product is the smaller version and sturdily built to provide lasting ice periods. It boasts of 1.5 thick walls and has a 28-quart capacity and can retain 30 12 ounce cans.

For ease of transportation, molded in grip handles are integrated on the sides. It’s a marvel as the cooler weighs no more than 1.83 pounds compared to the lifoam Hercules which is more prominent in size.

This small Styrofoam cooler is inexpensive and for it’s worth, purchase and I guarantee you a champion in hand.

Next up on our list is the most massive Styrofoam cooler. It has also received mixed review ratings.

Coming in at 50-quarts and dimension of 24-Inch by 14-Inch by 15-Inch, It provides enough space to fit in all your food & beverages plus ice. Also, it weighs 1 pounds, meaning its incredibly light.

The Styrofoam is made of premium materials giving it a scuff-proof surface. The corners are thickened to avoid leaks and ribbed bottom to prevent the cooler from failing or sliding off surfaces.

On the downside, many real users weren’t satisfied entirely with the durability of the product, but it could be nitpicking since most Styrofoam coolers aren’t as durable as hard coolers.

Another exceptional Styrofoam cooler is 5-gallon bucket companion. It’s a great option, if you are looking for a more affordable cooler.

The Styrofoam bucket liners provide space to fit in any 5-gallon standard bucket. It’s simple to use, slide in your liner into the 5-gallon bucket and everything fits in like a match made in heaven.

Some reviews reported increased lifetime – other reviews even said putting the liner into the bucket provides a hard-cooler effect.

You have to test it for yourself and see.

Toss your drinks in the cooler and close the lid to enjoy a day of cold beverages. Overall, the comparatively low price, impressive design and ice performance make the 5-gallon bucket companion a good fit for many users.

Produced with thick density foam walls of 1-1/4″ Wall thickness, what you get is a durable container for shipping various equipment affected by temperature, from genetic engineering, diagnostic testing to organ procurement items.

Regarded to be thermo chill insulated, the manufacturers include reagents, lab cultures, and chemicals as other lab testing applications as viable items to be transported via the product.

The small insulated shipping box is available in packs of case of 2, 2 cases of 2 and 3 cases of 2.

In all, the cooler is thick, recyclable and economical. If you are looking for a shipping box to keep temperature sensitive items when shipping, there you have it.

Want to ship bottles of wine or maybe your favorite drink? More than anything, the condition of the product more than anything matters. You don’t want to take chances of your bottles breaking; so you need the handy champagne shipper.

Taking the form of a crate, it includes 12 holes to fit in your champagne bottles. Additionally, the 12-bottle champagne cooler ships in a box to protect the items further, making sure your bottles come in perfect condition.

Don’t want to ship your champagne in it? Fine, you can also shit 22 oz bottles and 12 oz cans. Besides its classic design, the price is also very attractive for budget buyers.

How is Styrofoam Made?

Styrofoam is a trademark of Dow chemical company. Before then, Dr. Leo H Baekeland discovered foaming plastics mistakenly through an experiment with phenol and a formaldehyde gas to make a nonporous resin.

Soon after his death in 1944, foamed plastics were developed through a special epoxy foam which led to the production of polystyrene.

Styrofoam also known as the blue board is a conventional building material used for thermal insulation. Made of petroleum or gas through the reaction of benzene and ethylene.

The manufacturing process includes the using interconnected molecules to help heat control. The EPF is used in many types of equipment today like coffee cups, plates, coolers and much more.

The combination of ethylene and benzene produces styrene. Styrene is subsequently subjected to the suspension polymerization and treated with a polymerization initiator to form polystyrene.

Technicians will stop the reaction when the desired length is formed. An irregular Polystyrene beads are formed which is cleaned to remove impurities. Next, the beads are melted and a blowing agent added to extrude the beads.

To get an even surface EPF foam, the beads are expanded while the density reduces. They are heated and expanded before allowed to sit for 24 hours to cool and harden. Finally, the beads are fed into the mold of desired shape.

Pros and Cons of Foam Coolers

Styrofoam is the most flexible material to create an insulating material of your desired shape. Take, for instance; the 5-gallon bucket companion made functional by sliding into a 5-gallon bucket.

Not only is Styrofoam inexpensive but could easily be recycled or better still, disposed of. If you are not a regular user of coolers or maybe you need a cooler for a day picnic, or beach, you’ll find Styrofoam more feasible to use and dispose of after.Besides, compared to conventional coolers, they are incredibly light and user-friendly.

Coming to the downsides, the major turnoff is the generally poor ice life. Some soft coolers tend to project better ice time than Styrofoam. In fact, ice performance doesn’t last for more than a day. Compared to most hard-cooler walls, Styrofoam is equally thick, but not dense.  Additionally, the quality limits how you use it. Unlike hard coolers, you wouldn’t expect Styrofoam to get hurled by a grizzly without breaking open.

Next up is the lid which doesn’t seal well to the base. Apparently, the absence of a fridge grade gasket allows air to slip through, thus, impedes ice performance.

For conscious activists, Styrofoam is bad luck as it is not biodegradable. According to Wikipedia, On July 1st, 2015, New York City became the first city to attempt to prohibit the sale, possession, and distribution of single-use polystyrene foam. In fact, the state of Francisco, approved the ban of Styrofoam EPS in the US starting from January 1, 2017.

Where to buy Styrofoam Coolers?

Looking for foam coolers? They are common, and you can get them at any drug store or gas station. However, to narrow down your options with the most success. We recommend you check Amazon to find reviews from people who have used the product.

How to Choose the Best half-gallon water jug 2022: The Complete Guide